When MS impeded his horseback riding ability, Michael Muir, a life-long horseman, refused to hang up his saddle. In a short time, he taught himself how to drive teams of horses and became a competitor in the sport, capturing the team bronze medal in the 1998 Drivers with Disabilities Championship.

Michael received a Betaseron® Champions of CourageSM grant which helped enable him to compete again in the 2000 World Championships. He came home with a gold in the obstacle portion of the competition.

Not one to rest on his laurels, in 2001 Michael drove a team of horses across the country to inspire others who feel challenged by their condition, and to raise awareness about MS. He finished his Horsedrawn Journey Across America in Washington DC.

When Michael was diagnosed with MS over 30 years ago at the age of 15, he vowed to focus on what he could still achieve, in spite of his disease. This positive attitude has helped him deal with a myriad of problems including profound fatigue, impaired memory and balance, numbness and a limited ability to walk unassisted.

“It is vital to keep the focus on doing, rather than in lamentation for what has been lost,” says Michael. “The worst disability is a bad attitude.”

The Horsedrawn Journey Across America

Following are highlights of Michael's adventure, as they happened!

December, 2000 – A kick-off event celebrating the Horsedrawn Journey Across America takes place in Palo Alto at Spago's. Michael met another champion, Joe Montana, who appeared to lend his support!

January 30, 2001 – The Horsedrawn Journey Across America begins from lovely Mission San Diego, after the drivers and horses receive a blessing from Monsignor Prendergast. Events of the day include an opportunity to view the horses and special equipment.

March 7, 2001 – Michael is spending the month of March in Arizona. He plans to spend the week of March 13 in Phoenix and Scottsdale meeting with Governor Jane Dee Hull and giving demonstrations at therapy centers. Then, he heads to Tucson and on to Tombstone, where the famous shootout at the OK Corral took place in 1881. Michael and Company should make quite a splash in this colorfully historic western town.

April 23, 2001 – More than 600 miles and three months into the Horsedrawn Journey Across America, Michael Muir and company will be visiting New Mexico and Texas during April and May. State Senator Steve Komadina is sponsoring the horses at the family's Vista Hermosa Llama Farm in Corrales, NM during their stay in that state.
In Albuquerque, they gave wheelchair carriage rides to patients in the rehabilitation units of local hospitals, including Cody Unser, 14-year-old daughter of Bobby Unser, Jr. who is in a wheelchair from a disabling spinal disease.
They have received a letter of support from New Mexico Governor Gary Johnson and are meeting with representatives from the New Mexico Commission for the Concerns of the Disabled to spread their message that disability does not mean inability.
On his website, Michael wrote recently: "The Horsedrawn Journey Across America is carrying a message of hope and inspiration to people everywhere who are challenged by disability. We have seen the power of this message in the faces of the children we have met. We have felt the surge of joy in demonstrating to someone who has been injured that disability does not mean inability. Opening the door to a more active and rewarding life for those who struggle with crippling illness is the guiding force of this journey."

May 30, 2001 – Michael Muir and company report they are "still alive" and approaching Abilene, TX. Michael is doing well actually and happy to be out of the desert and coming in to the grassland.
They had a TV spot in Midland, Texas on Channel 7. They opened the nightly news with a report on Michael and company visiting a local rehab center and giving rides in the wheelchair carriage.
Michael and company will be heading toward Austin and Oklahoma City in the months of June and July. You can read their first-hand account of this epic journey by logging on their website.

June 30, 2001 – Michael Muir traveled to Oklahoma City the week of June 25 for a performance with the National Appaloosa Show. While there he made time to visit fellow Champion Linda Chance. Linda arranged an appearance for Michael and the team at a local nursing home. Michael's visit made the local news—his story appeared on the CBS-TV station, as well as in the Daily Oklahoman.
Michael returned to Texas to celebrate the July 4th holiday and enjoy the Muir family reunion in Honeygrove, TX.

August 7, 2001 – After traveling through Little Rock on their journey East, Michael Muir and company arrived in Memphis on August 3. Although rain forced the cancellation of a scheduled visit to a local children’s hospital, it has not dampened this team’s spirit. They’re on their way to Nashville. Go Michael!

September 10, 2001 – Michael Muir and company arrive in Lexington where he meets fellow Champion Delbert Richardson, as well as a lot of new fans...

November 1, 2001 – Champions Michael Muir and Delbert Richardson Complete their Cross-Country Journeys in Washington, DC. The Betaseron Champions of Courage program celebrated with Michael Muir and Delbert Richardson as they ended their parallel cross country journeys in Washington, DC on Thursday, November 1. Delbert pedaled into town in the early morning. Michael and his Horsedrawn Journey trotted in later that morning and staged a parade in front of the Capitol. There was plenty of excitement among passers-by. Television cameras and photographers were on hand to capture the excitement. It was a great day for everyone!


THIS INFO WAS TAKEN AT THE CHAMPIONS OF COURAGE ; I've emailed Mike to see if he'll give us some additional info for our website! 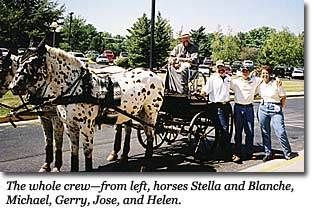 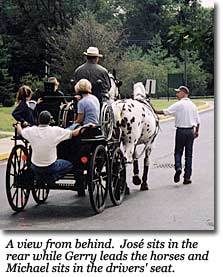 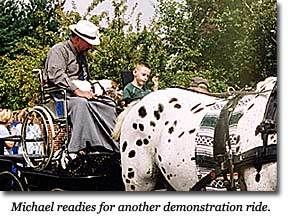 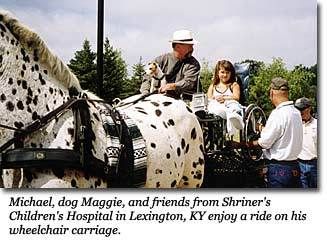 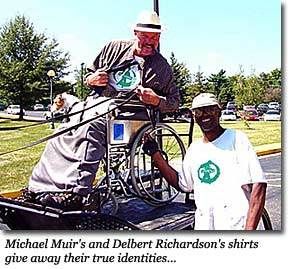 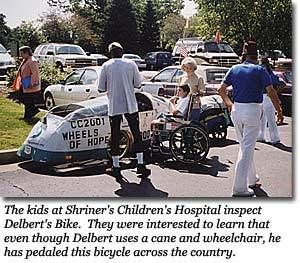